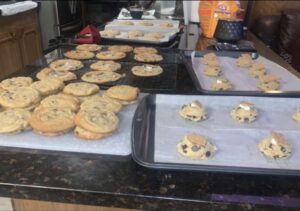 Every single Saturday at Kansas Wesleyan you see people walking around with different flavors of cookies. You’re probably wondering “where are all these cookies coming from and how are there so many”? Well over in Wesley Hall there is a freshman named Jason Traister and he takes his free time every Saturday to make and sell cookies in the lobby of Wesley Hall. One of his biggest hobbies when he lived at home was baking and when he got to campus he thought he was going to have to quit his hobby for the time being until he found one of the only ovens on campus. Since he found out his hall has an oven he has been taking a majority of his Saturdays making cookies and selling them for one to two dollars per cookie. 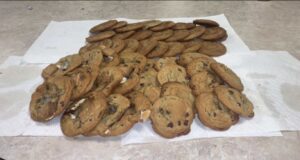 Jazzy J Jazzes up the Kitchen

Jason who is also known as “Jazzy J” taught himself to bake at a very young age when he needed something to do in his free time. He taught himself to bake through lots of trial and error runs. Through those trial and error runs he learned how to make all of his cookie recipes from scratch. Right now Jason makes 8 different flavors of cookies including the pumpkin spice snickerdoodle coming in October. Jason says “the hardest part about making cookies is coming up with diverse flavors of cookie dough that people will enjoy.” With that also comes another problem for Jason where he can’t cook everything he wants to cook because there are no stove tops at Kansas Wesleyan. Normally he makes all different kinds of cookies, toffees, and brownies but since coming to college he has been very limited on what he can bake. 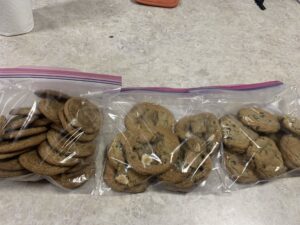 On Saturday night the 17th there were a lot of thunderstorms and they flooded the basement of Wesley where Jason makes his cookies because the windows are not sealed. The basement of Wesley is also carpet so the water is still stuck in there and makes it smell so he can’t make any cookies so he is shut down for right now. He said, “hopefully soon I will have access to the United Methodists Church’s kitchen to be able to make not only my cookies but also my many other creations for students at Kansas Wesleyan to enjoy.”

Jason is a very fun and outgoing guy as many people would say. Not only is he the “Cookie Man” but he was also just elected the freshman class president and he is a thrower on the track and field team. With his many roles he juggles he still continues to try and grow his cookie business as much as he can. He always looks for the positives even when life is getting him down. Almost anyone you ask on campus can tell you that they know “Jazzy J ” no matter what role they know him as. Jason is just the sunshine of everyone’s day even when he doesn’t have cookies on him. So next time you’re bored on a Saturday and are just wanting something sweet, see if you can find “Jazzy J” for a nice cookie treat.