There’s a reason that the “student” portion of “student-athlete” takes precedence in the phrase. The opportunity to play collegiate athletics and take on next-level competition is a privilege that not everyone gets to enjoy, but it comes with a requirement to keep a Grade Point Average (GPA) high enough to remain academically eligible. Without performance in the classroom, performance on the field becomes a non-factor.

Following the release of team GPA averages for the Fall 2021 semester, I thought it would be interesting to take a deep dive into the numbers and highlight some of the standout statistics. Specifically, this concept interested me because of some of the drastic changes that have not only taken place dating back to the Fall 2020 semester, but extreme shifts have taken place looking through a long-term lens as well. As they apply to strictly the most previous school year, some of the highlights are as follows (per the Athletics Committee):

Safe to say, KWU has seen an enormous improvement in team GPA in recent years. There has been an almost-universal uptick in average GPA, with a whopping 15 out of 22 eligible teams showing improvement from the Fall 2020 semester. Coyotes are putting more emphasis on academic achievement than ever before and the results are starting to show. Also worth noting is that most teams that did show regression showed only minimal decreases. In fact, of the teams that regressed, three of the five teams that fall into that category remained in the top 5 in total GPA. Essentially, the decrease in GPA is more of a nod to previous outstanding outside academic achievement and less of an indictment on these teams’ efforts in class this school year.

Also worth noting is the shift in which teams have made significant jumps in recent years. Only a few short years ago, every single slot in the top 10 on the list was owned by a female team. Currently, four of the ten slots belong to male athletic teams on campus. This is just another indicator of the tremendous strides that all teams have made in the last few years, with academic excellence becoming a more well-rounded dynamic instead of being dominated by female athletes.

So, how does this compare with other trends and averages? What does KWU do from an academic achievement standpoint that falls in line with other universities? I thought it would be interesting to take this analysis a step further and apply/compare these numbers to other schools in Kansas where athletics are more of a priority. Specifically, to accomplish this, I took a look at the other three Kansas Division I schools and their respective academic achievement to see how exactly these two different types of program structures stack up academically.

Although grade point averages by the team were not readily available, the NCAA’s APR (Academic Progress Rate) provides another way to measure and study academic success by team/sport. The APR takes the academic performance of the team for each and every NCAA program and assigns it a numerical score. The maximum score is 1000 and a team with any score below 930 risks obtaining academic penalties. The most recent data offered from NCAA’s APR calculator was from the 2018-2019 school year. 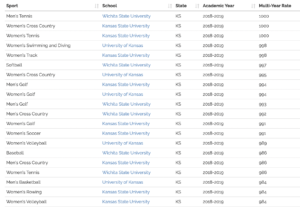 The most consistent pattern between KWU and the D1 juggernauts was the high academic achievement of female athletes; although male-oriented teams have made major improvements in recent years in climbing up the team GPA ladder, it would appear that, at least for now, academic achievement + athletic prowess is still combination that is predominately mastered by female athletes. 6 of the first 7 highest APR rankings for all Kansas-based NCAA Division-I teams are women’s programs, including:

Worth noting is that both at KWU and the large D1 programs, Women’s XC is either at or near the top of this category. Other D1 programs with mostly outstanding APR scores include volleyball both men’s and women’s tennis, which is consistent with the KWU GPA data. Overall, 7 out of the top 10 APR grades are women’s teams, which is also aligned with the KWU info, where 6 of the top 10 teams are comprised either in part or entirely of female athletes.

After reviewing this data, there are certainly a couple of conclusions that can be reached regarding which teams tend to have the most academic success. Typically, the high-end academic success for student-athletes belongs to female competitors, which was a valid conclusion after analysis of both the KWU and Division-I data. Diving a little bit further, there were also consistencies regarding which sports are winning the most inside the classroom: Cross Country, Tennis, and Volleyball are among teams that fit this category. As previously noted, this kind of data can be subject to a severe change in a short amount of time, so it will be interesting to continue close surveillance of these numbers in an effort to detect any new changes/trends that may be set to take place in the future.