Former and current Coyote athletes, coaches and administrators made their way to campus during homecoming weekend to honor the 2022 Jerry Jones Athletic Hall of Fame at Kansas Wesleyan University inductees.

The Saturday morning brunch started with a speech from athletic director Steve Wilson, and another from university vice president Ken Oliver, congratulating and welcoming everyone.

“Our honorees honor us with their presence, we are so glad to have you back on campus today,” Thompson said. “You were a part of a winning tradition at Kansas Wesleyan, and that is being carried on.”

“Our first honoree is never missed at an athletic event at Kansas Wesleyan,” Wilson said. “He is a staple, he has been in the athletics family for two decades.”

Toelle started at KWU as a student competing on the cross country team prior to his first bachelor’s degree in 2001 for computer science. After being sidelined due to an injury, Jerry Jones asked him to help with statistics during a basketball tournament, triggering the launch of his legacy at KWU. In 2005, he was named the full-time Sports Information Director. 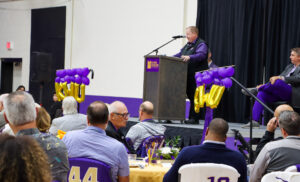 He has been named the KCAC SID of the year two times now, in 2012 and 2020. Even as an SID, he managed to earn his second bachelor’s degree in sports management in 2008.

Using his computer science degree, Toelle helped design and launch the Coyote athletics website in 2009, and led the effort for two redesigns since then.

In his acceptance speech, Toelle highlighted how the school has changed for the better in the athletics department.

“We were one of the first in the KCAC and probably the NAIA to livestream. We used a camera we borrowed from the Victory Sports Network,” Toelle said. “Now look at what we do. We have tricasters, eight cameras at commencement, HD video streams, graphics.

“We’re at the top of the mountain, and we intend to stay there.” 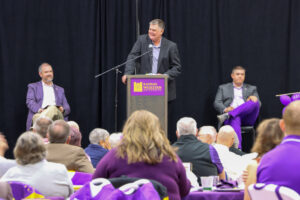 After six seasons of Coyote basketball not meeting expectations and averaging seven wins a season, Jerry Jones recommended Gordon Reimer for the job. Reimer was an assistant women’s coach at McPherson College, and was due for a head coach spot.

“McPherson said that (Reimer) knew basketball, that he’ll win, be aggressive, intelligent, hard working and dedicated,” Jones said. “So I called Reimer, and he became the all-time winningest women’s coach at Kansas Wesleyan.”

Riemer is one of two coaches in KWU history to win over 100 games in their tenure, with a 140-105 overall record.

Reimer brought the KCAC championship back to the Coyotes in 2009, the first championship earned by women’s basketball since 1988. He was named the KCAC coach of the year in 2009 as well, and brought KWU to the NAIA National Championship appearance for the first time in school history.

West was unable to attend the brunch, but his greatness was still acknowledged. West played two seasons for the Coyotes, in 1975 and 1976. He was rewarded with being named First Team All-KCAC in his first season after running for 1,106 yards and nine touchdowns.

He received the same honor in his second season, as well as being named Second Team NAIA All-American. After rushing for 314 yards in one game, West held the school record for most yards rushed in one game until 2012.

Led by former head coach Tommy DeSalme, the team earned the KCAC Regular Season Championship and the KCAC Tournament Championship. They then went on to make the first appearance in the NAIA National Tournament for the first time since 1950, losing in the second round.

Tommy DeSalme was named KCAC Head Coach of the Year, and Marcus Fabion was named to the All-KCAC First Team. Faubion was also awarded with the KCAC Player of the Year.

Along with Faubion being named on the All-KCAC First Team was Jeff Baron, Trey Sims, and Anthony Smith.

While this season’s team had an excellent coach at the helm with Reimer, it’s impossible to have a good team without good players. The team finished with a 27-6 record, which included a 15-game winning streak. The streak lasted all the way up until the end of their season. A highlight from the streak was when the Coyotes upset the No. 5 Sterling Warriors in front of a crowd of KWU fans. Sterling could not catch a break from Kansas Wesleyan, their next match up ended in a 70-61 victory for the Coyotes over the Warriors to earn the KCAC Tournament Title. That title was the first in women’s basketball history for KWU.

All inductees were honored during half-time at the homecoming game against Tabor College on Saturday evening. 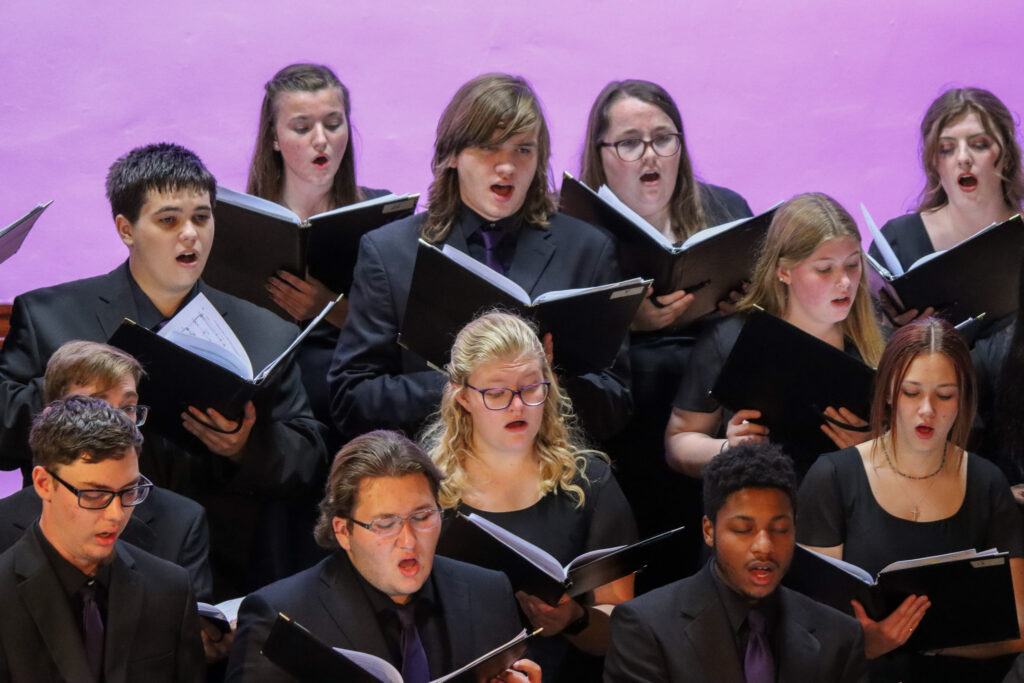 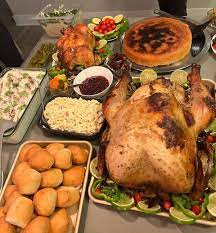